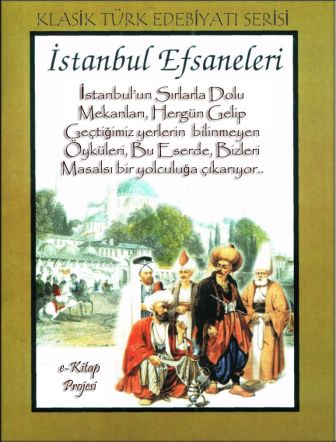 City of sultans, city of legends

City of Sultans, City of Legends, here are many legends associated with the city of İstanbul, some stretching back to when the city was called “Constantinople” by the Romans or “Âsitâne” by the Ottomans.

Once, a long time ago, there were many believers, and these believers spread all over the world. Those who wound up in Istanbul had much joy, as well as much grief. But in the end, there was really more joy than grief. Because after all, İstanbul the city was the sultan of hearts and minds. In a place like İstanbul, legends were bountiful.

The city of İstanbul is one of those places that, no matter how rampantly we try to consume its historical and cultural fabric, the city still finds a way to surprise us. It has served for so long now as a cradle of civilizations. But other cities ought not to be hurt by these assertions about İstanbul; especially Ankara, for it is the most beautiful of capitals, the capital of hearts.

İstanbul was of course called “Constantinople” by the Romans and “Âsitâne” by the Ottomans; every group of people seemed to call it a different name over the years, through each of its many epochs. Some called it “Dergah-ı Selâtin,” and others called it “Darü’s-Sultana.” What’s more, over time, this sultan of cities began to have countless legends associated with it; legends repeated from person to person, the veracity of most was never questioned by anyone.

In the meantime, though, publishing company  has gathered many of these legends in one tome. Edited and organized by e-Kitap Projesi, they are offered up under the name “İstanbul Legends.” Going all the way back to the founding of the city, the book starts with what is perhaps one of the best known of the city’s legends, the “Legend of the Theban migrants.” For those who don’t know this one, a brief summary: “Byzas of Thebes set out to form a new city. Not knowing where this new city would be located yet, Byzas goes to a soothsayer, who tells him only ‘You will create this city right across from the ‘Country of the Blind.’ Byzas looks and looks, but cannot find any ‘Country of the Blind.’ But one day, while resting on the banks of the sea, he looks across the water at a city that sits on the other side, and says incredulously, “Are those people blind? Why would they settle there when this place here exists!?” As it turns out, that “Country of the Blind” was none other, location-wise, than what we call Kadıköy today. And so it was that the foundations for this new city were put down right across from Kadıköy, in what is today called Sarayburnu, and the new city was of course called Byzantion, which translated as the city of Byzas.

According to travel writer Evliya Çelebi though, the real story herein was much different. After a long struggle, Prophet Sulaiman marries Alina, the daughter of Saydun. Alina asks for a very special palace to built, after which Sulaiman sends out his men to find “the most beautiful spot possible” for a new palace to be built. The men go all over the world, but in the end, focus on İstanbul. Thus it is that builds his palace there, and prays that the city will remain forever prosperous. According to Uhrayoğlu, it is because of this prayer that İstanbul has managed to stay standing despite so many fires, earthquakes and other disasters.

This new book also covers legends that relate directly to Fatih Sultan Mehmet, the Ottoman that led the conquering of the city. Here is one legend related to him: “Fatih Sultan Mehmet headed out hunting one day. The sultan, who had headed outside of the city walls, was not able to return until after the dark had already fallen. But the sultan was surprised when he made his way back to city walls and ramparts: The janissaries, who had been ordered to never open the city gates after dark, had fallen. And so it was that the janissaries refused to open the gates, sorely testing the sultan’s patience until he was forced to show them his sultan’s clothing to convince them. At the end of this legend, the sultan says “What incredible solders you are!” In fact, it is said that Yavuzer Sinan Mosque, located at the end of Unkapanı, was built in 1455 on orders from this same janissary.

Construction material from jewels sent by the Shah

And of course, legends. There are lots of legends surrounding Süleymaniye Mosque. One of those covered in the book goes like this: Mimar Sinan stopped construction on the mosque for one year so as to ensure that its foundations were strong. Grabbing the opportunity this situation provided, Safavid Shah Tahmasp I sent a box of jewelry to Ottoman Sultan Süleyman, theoretically to help defray the costs of the construction of this mosque, but really to embarrass the sultan. When Mimar Sinan heard about this, he was furious, and in front of the Shah’s envoy, ground the jewels to a dust that he then placed in the foundations of the mosque.

Then of course, there is “Kızkulesi” (Maiden’s Tower) and the many legends that surround this spot. There is the story of Hero and Leandros: Hero is a priestess who served the Temple of Aphrodite, forbidden thus from falling in love. But somehow, she falls in love with Leandros. Leandros swims every evening to see Hero at Kızkulesi, which is of course surrounded by water. To help him, Hero lights a fire every evening so he can see his way through the water. But one windy night, the fire goes out and Leandros loses his way in the waters, drowning in the dark. After this, a distraught Hero drowns herself in the Bosporus. Of course, a better-known legend connected to Kizkulesi is that Emperor Constantine, afraid that his beautiful daughter will be bitten by a poisonous snake, locks her away in this tower surrounded by water. The princess is later tragically bitten by a snake hiding in a plate of grapes that are sent out to the island.

The legends connected with İstanbul are endless. What’s more, the various edifices of this city become even more beautiful when one knows some of these legends. Whether or not they are true, these legends add indescribable flavor to the fabric of this already incredible city.