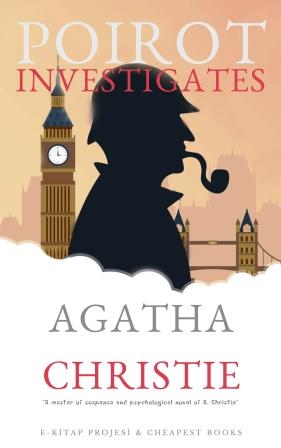 Poirot Investigates is a short story collection written by Agatha Christie and first published in the UK by The Bodley Head in March 1924. In the eleven stories, famed eccentric detective Hercule Poirot solves a variety of mysteries involving greed, jealousy, and revenge.

Poirot Investigates is a short story collection written by Agatha Christie and first published in the UK by The Bodley Head in March 1924. In the eleven stories, famed eccentric detective Hercule Poirot solves a variety of mysteries involving greed, jealousy, and revenge. The American version of this book, published by Dodd, Mead and Company in 1925, featured a further three stories. The UK first edition featured an illustration of Poirot on the dust jacket by W. Smithson Broadhead, reprinted from the 21 March 1923 issue of The Sketch magazine.

Poirot receives a visit from Miss Mary Marvell, the famous American film star on her visit to London. She has received three letters, handed to her by a Chinese man, which warn her to return her fabulous diamond jewel, the "Western Star", to where it came from – the left eye of an idol – before the next full moon. Her husband, Gregory Rolf, who bought it from a Chinese man in San Francisco, gave Mary the jewel three years ago. The pair are going to stay at Yardly Chase, the home of Lord and Lady Yardly when the moon is next full to discuss the making of a film there and Mary is determined to go with her diamond. Both Poirot and Hastings remember society gossip from three years back that linked Rolf and Lady Yardly. The Yardlys also own an identical diamond that came from the right eye of the idol – the Star of the East.

After Mary has gone Poirot goes out and Hastings receives a visit from Lady Yardly, who was advised to visit Poirot by her friend Mary Cavendish. Hastings deduces that she too has received warning letters. Her husband plans to sell their jewel as he is in debt. When Poirot learns this he arranges to visit Yardly Chase and is there when the lights go out and Lady Yardly is attacked by a Chinese man and her jewel stolen. The next day, Mary's jewel is stolen from her London hotel. Poirot makes his investigations and returns the Yardly's jewel to them.

Poirot tells Hastings that there never were two jewels or any Chinese man – it was all an invention by Rolf. Three years before in the United States he had an affair with Lady Yardly and blackmailed her into giving him the diamond which he then gave to his wife as a wedding present. Lady Yardly's was a paste copy that would have been discovered when her husband sold it. She was starting to fight back against her blackmailer and Rolf arranged the deception against his wife that Lady Yardly copied when Hastings told her of the threats. Poirot's threats manage to persuade Rolf to give the real diamond back and leave the Yardlys in peace.