Home > Books > The Man in the Brown Suit 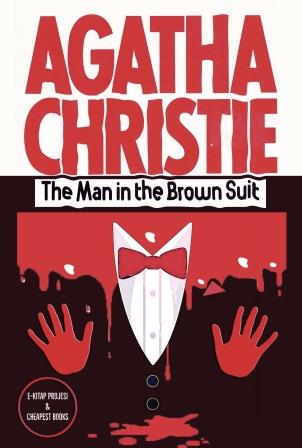 The Man in the Brown Suit is a work of detective fiction by British writer Agatha Christie, first published in the UK. The character Colonel Race is introduced in this novel.

The Man in the Brown Suit is a work of detective fiction by British writer Agatha Christie, first published in the UK. The character Colonel Race is introduced in this novel.

Anne Beddingfeld is on her own and ready for adventures when one comes her way. She sees a man die in a tube station and picks up a piece of paper dropped nearby. The message on the paper leads her to South Africa as she fits more pieces of the puzzle together about the death she witnessed. There is a murder in England the next day, and the murderer attempts to kill her on the ship en route to Cape Town.

Nadina, a dancer in Paris, receives a visit from Count Sergius Paulovitch. Both are in the service of "the Colonel", an international agent provocateur and criminal. "The Colonel" is retiring, leaving his agents high and dry. Nadina has a plan to blackmail the Colonel.

Anne Beddingfeld is an orphan after the sudden death of her archaeologist father. Longing for adventure, she jumps at the chance live in London. Returning from an unsuccessful job interview, Anne is at Hyde Park Corner tube station when a man falls onto the live track, dying instantly. A doctor examines the man, pronounces him dead, and leaves. Anne picks up the note he dropped, which reads "17.1 22 Kilmorden Castle". The inquest of L B Carton brings a verdict of accidental death. Carton carried a house agent's order to view Mill House in Marlow, and the next day the newspapers report that a dead woman has been found there, strangled. The house belongs to Sir Eustace Pedler MP. A young man in a brown suit is identified as a suspect, having entered the house soon after the dead woman.

Anne realises the examination of the dead man was oddly done, and becomes suspicious. At Mill House, she finds a canister of undeveloped film and she learns that Kilmorden Castle is the name of a sailing ship. She books passage on it. On board the ship, Anne meets Suzanne Blair, Colonel Race, and Sir Eustace Pedler. In addition to his secretary, Guy Pagett, Pedler employs Harry Rayburn.