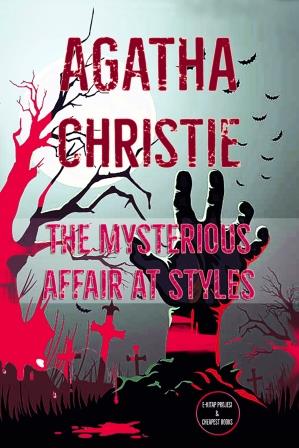 The Mysterious Affair at Styles is a detective novel by British writer Agatha Christie. It was written in the middle of the First World War, in 1916, and in the United States in 1920 and in the United Kingdom in 1921.

The Mysterious Affair at Styles is a detective novel by British writer Agatha Christie. It was written in the middle of the First World War, in 1916, and in the United States in 1920 and in the United Kingdom in 1921. Styles was Christie's first published novel. It introduced Hercule Poirot, Inspector (later, Chief Inspector) Japp, and Arthur Hastings. Poirot, a Belgian refugee of the Great War, is settling in England near the home of Emily Inglethorp, who helped him to his new life. His friend Hastings arrives as a guest at her home. When the woman is killed, Poirot uses his detective skills to solve the mystery.

The book includes maps of the house, the murder scene, and a drawing of a fragment of a will. The true first publication of the novel was as a weekly serial in The Times, including the maps of the house and other illustrations included in the book. This novel was one of the first ten books published by Penguin Books when it began in 1935. This first mystery novel by Agatha Christie was well received by reviewers. An analysis in 1990 was positive about the plot, considered the novel one of the few by Christie that is well-anchored in time and place, a story that knows it describes the end of an era, and mentions that the plot is clever. Christie had not mastered cleverness in her first novel, as "too many clues tend to cancel each other out"; this was judged a difficulty "which Conan Doyle never satisfactorily overcame, but which Christie would."

One morning at Styles Court, an Essex country manor, its household wake to the discovery that the owner, elderly Emily Inglethorp, has died. She had been poisoned with strychnine. Arthur Hastings, a soldier from the Western Front staying there as a guest on his sick leave, ventures out to the nearby village of Styles St. Mary, to enlist help from his friend staying there – Hercule Poirot. Poirot learns that Emily was a woman of wealth – upon the death of her previous husband, Mr. Cavendish, she inherited from him both the manor and a large portion of his income. Her household includes: her husband Alfred Inglethorp, a younger man she recently married; her stepsons (from her first husband's previous marriage) John and Lawrence Cavendish; John's wife Mary Cavendish; Cynthia Murdoch, the daughter of a deceased friend of the family; and Evelyn Howard, Emily's companion.

Poirot learns that per Emily's will, John is the vested remainderman of the manor – he inherits the property from her, per his father's will. However, the money she inherited would be distributed according to her own will, which she changed at least once per year; her most recent will favours Alfred, who will inherit her fortune. On the day of the murder, Emily had been arguing with someone, suspected to be either Alfred or John. She had been quite distressed after this, and apparently made a new will – no one can find any evidence that it exists. Alfred left the manor early that evening, and stayed overnight in the village. Meanwhile, Emily ate little at dinner and retired early to her room, taking her document case with her; when her body was found, the case had been forced open and a document removed. Nobody can explain how or when the poison was administered to her.