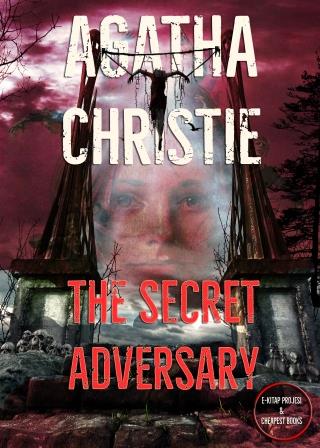 The Secret Adversary is the second published detective fiction novel by British writer Agatha Christie, first published in 1922 in the United Kingdom. The book introduces the characters of Tommy and Tuppence who feature in three other Christie novels and one collection of short stories.

The Secret Adversary is the second published detective fiction novel by British writer Agatha Christie, first published in 1922 in the United Kingdom. The book introduces the characters of Tommy and Tuppence who feature in three other Christie novels and one collection of short stories; the five Tommy and Tuppence books span Agatha Christie's writing career. The Great War is over, and jobs are scarce. Childhood friends Tommy Beresford and Prudence "Tuppence" Cowley meet and agree to start their own business as The Young Adventurers. They are hired for a job that leads them both to many dangerous situations, meeting allies as well, including an American millionaire in search of his cousin.

In 1919 London, demobilised soldier Tommy Beresford meets war volunteer Prudence "Tuppence" Cowley. They are both out of work and money. They form "The Young Adventurers, Ltd". Mr Whittington follows Tuppence to offer her work. She uses the alias "Jane Finn", which shocks Whittington. He gives her £50 and then disappears. Curious, they advertise for information regarding Jane Finn.

The advertisement yields two replies. The first is from Mr Carter, whom Tommy recognises as a British intelligence leader from his war service; he tells them of Jane Finn aboard the Lusitania when it sank. She received a secret treaty to deliver to the American embassy in London. She survived but no trace has since been found of her or the treaty, the publication of which now would compromise the British government. They agree to work for him, despite his warnings of the dangerous Mr Brown. The second reply is from Julius Hersheimmer, an American multimillionaire and first cousin of Jane Finn, staying at the Ritz Hotel. Intent on finding her, he has already contacted Scotland Yard; Inspector Brown took his only photo of Jane, before a real inspector contacted him. They join forces with Julius, too.