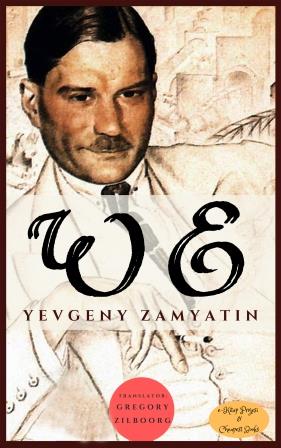 We is a dystopian novel by Russian writer Yevgeny Zamyatin, written 1920-1921. The novel was first published as an English translation by Gregory Zilboorg in 1924 in New York.

We is a dystopian novel by Russian writer Yevgeny Zamyatin, written 1920-1921. The novel was first published as an English translation by Gregory Zilboorg in 1924 in New York. The novel describes a world of harmony and conformity within a united totalitarian state. George Orwell claimed that Aldous Huxley's 1931 Brave New World must be partly derived from We, but Huxley denied it.

A few hundred years after the One State's conquest of the entire world, the spaceship Integral is being built in order to invade and conquer extraterrestrial planets. Meanwhile, the project's chief engineer, D-503, begins a journal that he intends to be carried upon the completed spaceship.

Like all other citizens of One State, D-503 lives in a glass apartment building and is carefully watched by the secret police, or Bureau of Guardians. D-503's lover, O-90, has been assigned by One State to visit him on certain nights. She is considered too short to bear children and is deeply grieved by her state in life. O-90's other lover and D-503's best friend is R-13, a State poet who reads his verse at public executions.

While on an assigned walk with O-90, D-503 meets a woman named I-330. I-330 smokes cigarettes, drinks alcohol, and shamelessly flirts with D-503 instead of applying for an impersonal sex visit; all of these are highly illegal according to the laws of One State.

Both repelled and fascinated, D-503 struggles to overcome his attraction to I-330. She invites him to visit the Ancient House, notable for being the only opaque building in One State, except for windows. Objects of aesthetic and historical importance dug up from around the city are stored there. There, I-330 offers him the services of a corrupt doctor to explain his absence from work. Leaving in horror, D-503 vows to denounce her to the Bureau of Guardians, but finds that he cannot.

He begins to have dreams, which disturbs him, as dreams are thought to be a symptom of mental illness. Slowly, I-330 reveals to D-503 that she is involved with the Mephi, an organization plotting to bring down the One State. She takes him through secret tunnels inside the Ancient House to the world outside the Green Wall, which surrounds the city-state. There, D-503 meets the inhabitants of the outside world: humans whose bodies are covered with animal fur. The aims of the Mephi are to destroy the Green Wall and reunite the citizens of One State with the outside world. 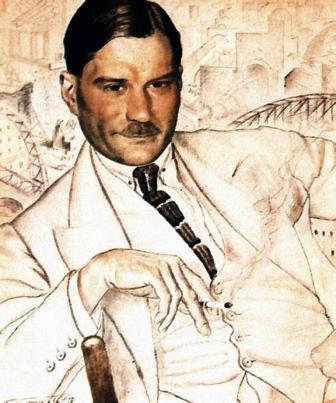 Yevgeny Ivanovich Zamyatin (1884 – 1937), sometimes anglicized as Eugene Zamyatin, was a Russian author of science fiction and political satire. He is most famous for his 1921 novel We, a story set in a dystopian future police state.
Despite having been a prominent Old Bolshevik, Zamyatin was deeply disturbed by the policies pursued by the Communist Party of the Soviet Union (CPSU) following the October Revolution.
In 1921, We became the first work banned by the Soviet censorship board. Ultimately, Zamyatin arranged for We to be smuggled to the West for publication. The subsequent outrage this sparked within the Party and the Union of Soviet Writers led directly to Zamyatin's successful request for exile from his homeland. Due to his use of literature to criticize Soviet society, Zamyatin has been referred to as one of the first Soviet dissidents.