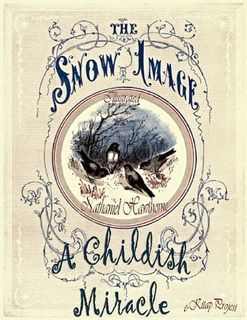 The Snow-Image {A Childish Miracle}

Some of Nathaniel Hawthorne's early stories for children which appeared initially in juvenile magazines ended up in collections of stories for adults. Such was the case with "Little Annie's Ramble," which appeared first in Youth's Keepsake and then, a few years later, in the first edition of Twice-Told Tales. Other stories took the reverse journey. They were written and published for adults, but were reprinted individually with illustrations for the juvenile market. One such story was "The Snow Image: A Childish Miracle," written for adults and published in 1851 in The Snow Image and Other Twice Told Tales. By the early 1860s, it had been published separately as an illustrated children's book and continued in print as such for many years, aimed at the 6 to 8 year old reader.